Mayor Dave Aker, members of City Council, and CAO Dana Spurrell are pleased to advise that the City of Mount Pearl and its municipal workers have reached a tentative agreement.

Additional details on the deal will be released when the agreement is ratified by the CUPE Local 2099 membership. A ratification vote is expected to happen in the coming days.

The city will not be commenting further until that time. 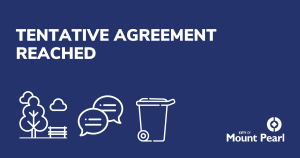